‘WandaVision,’ created by Jac Schaeffer and starring returning Avengers Paul Bettany (Vision) and Elizabeth Olsen (Wanda Maximoff), is by far the strangest addition to the MCU. Warning, spoilers ahead for the new series.

Debuting on Jan. 15 on Disney Plus, this “Twilight Zone” channeling mini-series jumps from decade to decade, with the stars seemingly trapped inside their own (period appropriate) sitcoms. Each episode is a new decade, and a new collection of TV tropes for audiences to wade through.

In a press conference on Sunday moderated by Jaleel White of “Family Matters” fame, a perfect nod to the many great sitcoms of the past “WandaVision” took inspiration from, the show’s stars and creators answered burning questions, including how Hydra factors into the show and which sitcoms were used for inspiration. Schaeffer, Bettany, Olsen, director Matt Shakman, Kathryn Hahn, Teyonah Parris and President of Marvel Studios Kevin Feige were all in attendance. Read on to find out everything we know so far about the series. 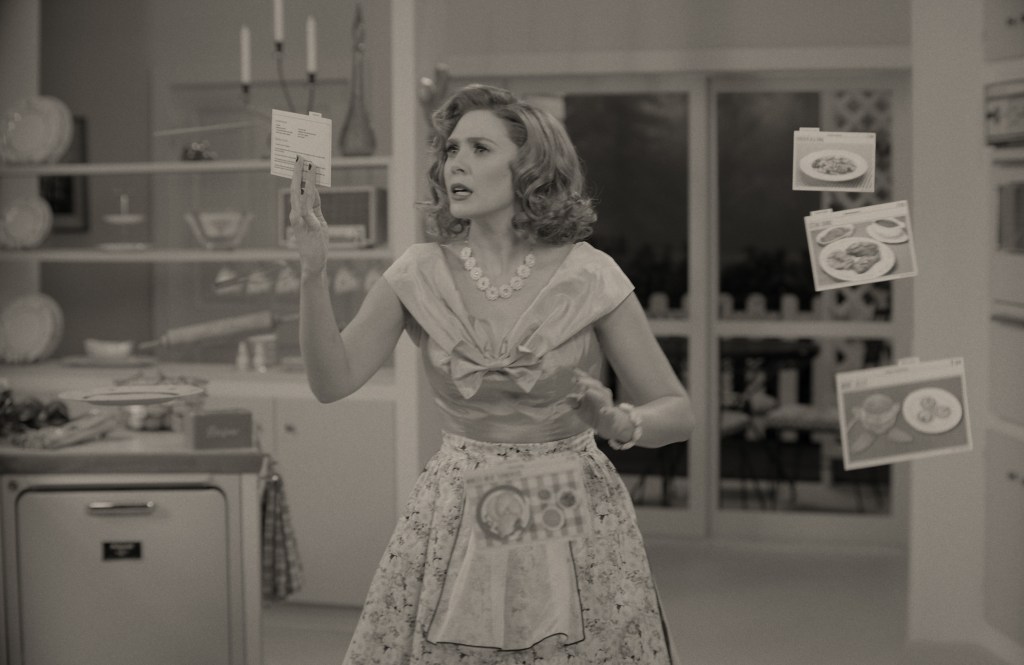 ‘WandaVision’ was taped in front of a live studio audience

To add that authentic sitcom feel, the first episode of “WandaVision” (set in the 1950s) was filmed in front of a live studio audience. Though it used to be the norm back in the day — as White pointed out, every episode of “Family Matters” was taped live — the method took Olsen a little getting used to. “It was so nerve wracking,” Olsen said. “There was a lot of adrenaline, there were a lot of quick changes, and it totally confused my brain… The idea of not playing to an audience, but feeding off an audience and having a camera. I was really grateful when we added the fourth wall.”

In order to remain as authentic as possible, director Shakman and Feige met with sitcom great Dick Van Dyke, who shared his wisdom. “I remember Kevin and I had this amazing lunch with Dick Van Dyke that remains one of the great afternoons of my life. And we asked him, ‘What was the governing principle behind ‘The Dick Van Dyke Show’? Why did it work so well?’ And he said, ‘If it couldn’t happen in real life, it can’t happen on the show,’” Shakman said.

Other aspects of production were also import to the show’s authenticity, such as the production design, cinematography and costumes. But more than anything, Shakman said that he and the cast did research by watching as many sitcoms as they could throughout the decades.

“We watched a ton of old television episodes and talked about how comedy changes, because it really does. The approach to comedy in the ’50s, ’60s, ’70s is really different. And as Lizzie said, doing it in front of this live studio audience, which is this quasi-theater-TV thing, it really adds to it,” Shakman said. “Lucille Ball, ‘I Love Lucy,’ Dick Van Dyke – you can feel the energy of that theatrical performance, working with the audience. And then when you get into ’60s shows like “Bewitched” or “I Dream of Jeannie,” it is a fourth wall and all of a sudden, it’s more like doing a movie these days and the laugh track is canned and brought in, which changes the energy, the approach, the style, everything.”

Yes, ‘Full House’ is an influence for the ’90s sitcom episode

More than anything, the creators of “WandaVision” turned to historical family sitcoms like “The Brady Bunch” and the aforementioned “Dick Van Dyke Show” for inspiration. This means past TV greats like “Taxi” aren’t going to be folded into “WandaVision,” the focus here is on family.

But will Olsen’s familial connection to “Full House,” starring her sisters Ashley and Mary-Kate open the door for a Tanner family reunion? Unclear, but the sitcom juggernaut was definitely an influence. That being said, it was important to the series creators to keep the influences authentic, they wanted to focus on the comfort factor of these shows. It was important that “WandaVision” didn’t come off as a satire.

“[Family sitcoms] meant a lot to us, dated and silly as they may seem, there’s a comfort factor there. That was the primary factor behind the comic inspiration versus what led us to putting putting these ideas together,” Feige said. “There is a wonderful thing that happened with Matt’s background [as a child actor] as he’s talked about, which is so amazing. Lizzie’s background with her sisters [Mary-Kate and Ashley Olsen], which didn’t even occur to me until I think we were standing in the writers room with pictures of ‘Full House’ on the wall and I went ‘Oh, right.’”

How did they keep ‘WandaVision’ modern, despite using old shows as tropes?

Shakman explained that since family sitcoms were the main influences for “WandaVision,” it wasn’t hard to bring those ideals into the modern day. “There are key reference points that were about this idea of family, and I think oftentimes that does age pretty well,” Shakman said. “And I think also the key references that we were looking at are those miraculous shows that have managed to be timely and timeless. They resonated in their moment, and somehow, you watch ‘The Dick Van Dyke Show’ today and it’s just as good as it was back then.”

Schaeffer agreed, adding that it was on the writers’ radar to steer clear of shows that put forward “disappointing” tropes. “When we looked back and we were doing research and looking at these older shows, there were shows that were a little disappointing and that were not acceptable for today,” Schaeffer said. “We had a really incredible writer’s room full of people who part of our job was to keep an eye on these things. And as Matt said, fairly quickly we zeroed in on family sitcoms. There are a lot of different workplace sitcoms and other types of sitcoms, but the family piece sort of kept us very centered.”

How does Hydra factor into ‘WandaVision’?

Despite feeling like an “I Love Lucy” re-run, “WandaVision” is firmly set in the MCU. And if you’re looking for easter eggs, pay close attention to the commercials. Yes, despite premiering on the streaming platform, Marvel Studios has inserted their own, slightly nefarious, ads with brief hints at an evil presence. “Other truths of the show begin to leak out, and commercials was an early idea for that,” Feige says. “And if this is the very first Marvel MCU thing you’re watching, it’s just a strange version of a ’50s commercial or a ’60s commercial that you’ll have to keep watching the series to understand. If you have been watching the movies, you might be able to start connecting what those things mean to the past.”

Where Has ‘Captain Marvel’s’ Character Monica Rambeau Been Before  ‘WandaVision’

Last we saw of the character Monica Rambeau she was just a little girl in the 1995-set film “Captain Marvel.” That little girl is now all grownup (played by Parris) and is somehow entangled in the “WandaVision” world. “Through the course of the show, we find out what she’s been up to what’s happened for her between that gap in the years,” Parris said hinting at something more nefarious. “And how she’s grown and evolved or… or not.”

When pressed if Rambeau has experiences the decades of MCU horrors (a global alien attack, half of the planet’s populating snapping out of existence) and how that impacted her emotionally Parris didn’t want to give too much away. “We actually do get to learn, particularly what those things are that Monica has seen and going  through and how they have shaped her life.”

Who is Kathryn Hahn’s character?

Similar to Rambeau, Kathryn Hahn’s character, Agnes — the nosy neighbor next-door — also has a mysterious past. Hahn says the show leans into this mystery.

“In all those classic sitcoms, there’s always that person that busts through the doors and sits on the couch but and you never get to know anything about them,” Hahn said. “In that classic way, I was able to walk into as Agnes with all those beautiful tropes set up behind me to just to just build on.”

How does ‘WandaVision’ set up the expanding MCU Universe on Disney Plus?

“I hope it says get ready for the new and the different,” Feige explained. “I hope all of our movies have said that but certainly with the Disney Plus opportunities it has allowed us to expand creatively, what we do. The original plan was ‘Falcon Winter Soldier’ was going to debut last year, followed very soon behind with ‘WandaVision.’ So creatively it didn’t reshuffle. Part of having a long-lead plan is having the ability and the ideas of how to shuffle, should the need arrive. I’m not saying we were prepped for a global pandemic, we were not… The unexpected has often served Marvel Studios well. And it has served us well in this case, because this show being our first one I love how bold it is, I love how different it is. And I love as I said before, it is something you can only see on a Disney Plus. We have things that you will only be able to see initially in theaters. We have things that could end and are made for that. And this is very much made to be seen week after week on television, which is very different for us.”